Below is the full article:


Need a Handbag or a Tie to Land Your First Job? Borrow One With a Library Card 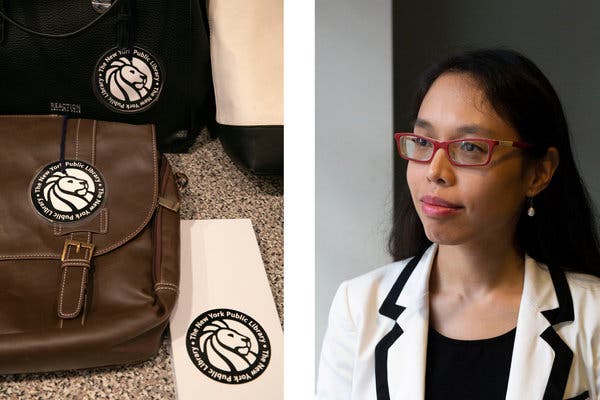 Handbags, briefcases and ties can be checked out for up to three weeks at a time at the Riverside branch of the New York Public Library, as part of a pilot program dreamed up by Michelle Lee, a young adult librarian.CreditCreditGabriella Angotti-Jones/The New York Times

On the second floor of the New York Public Library’s Riverside branch last week, a handful of high school students were eager to hear Michelle Lee, a young adult librarian there, discuss tricks for finding employment.
“Who has a job?” Ms. Lee asked. (No hands went up.)
“Who wants a job?” she continued. (All hands went up.)
For the next hour and a half, as some students munched on snacks, Ms. Lee covered the dos and don’ts of interviewing and offered tips on how to produce a strong résumé, even using fictitious examples for Peter Parker and Kamala Khan to illustrate her point.
And off to one side of the room were the most unusual new additions to the library’s collection: neutral-colored handbags and briefcases, and purple, blue and striped neckties, all of which can be checked out like books for up to three weeks.

The staff at the Riverside branch, on the Upper West Side, started a new lending program in August after Ms. Lee proposed it, one of several programs meant to help jump-start the professional careers of young adults. As news of the program has trickled out through outreach and news coverage, members of the community have offered their own items for lending.
Ms. Lee said she got the idea during one of her twice-yearly job hunt talks for teenagers. When she spoke about how it was important that they wear their best outfit for interviews, one attendee said he didn’t have one. 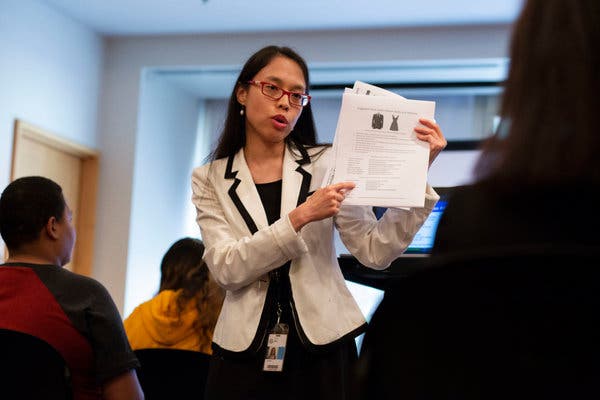 Ms. Lee gave a job hunt talk for teenagers this month, in which she covered the dos and don’ts of interviewing and offered tips on how to produce a strong résumé.CreditGabriella Angotti-Jones/The New York Times

She said she began to think of ways to help him, and had an idea. Lending accessories like handbags and ties, she thought, would help those who cannot necessarily afford to buy them and offer an extra dose of confidence.
In 2016, she submitted a proposal to the New York Public Library’s Innovation Project, which allows individual library employees to pitch ideas that are then voted on by the whole staff. Ms. Lee’s suggestion consisted of two parts: first, “adulting” workshops, focused on learning life skills like how to pick professional attire or how to eat healthy on a budget; and second, the lending program, known as the “Grow Up Work Fashion Library.”

The program adds to the New York Public Library’s list of services for young adults, which includes a referral system at the Grand Central Library to an organization that offers business attire, Ms. Lee said. Staff members at some libraries are trained as advisers to offer help. At the Riverside branch, employees host college essay workshops and SAT practice sessions.
On Wednesday afternoon, Ms. Lee held her second job talk of the year. She intentionally scheduled it just before the holiday season, when retail businesses are looking for extra hands.
She used her own outfit — a simple black dress and white blazer — as an example of business casual. She then pointed out the table where the new items sat, and told the students that they could check out two at a time, but that they would have to pay if they lost an item. The bags, which she bought from Amazon, range in price from $40 to $121, and ties are $25 to replace.
Sonobia James, 16, sat in the back row with friends. She said she attended the presentation because she had tried looking for a job before, to no avail. “I thought this was a good opportunity, because maybe I did something wrong,” she said.
She learned about the lending program through the talk, and said she would consider checking out a black handbag “when the time comes” to interview for jobs. 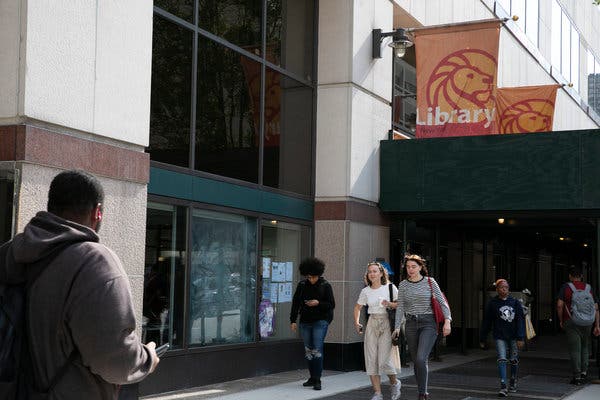 
“I always put things in my pockets,” she said, a habit that leads to her losing belongings. “A handbag could be useful.”

The program, while part of a larger project aimed at young adults, can be used by anyone, Ms. Lee said. She has had high school students and adults check out items since the pilot program began.
Angela Himmelberg, a senior at Pace University, said she heard about the program from her mother. Ms. Himmelberg, 21, was preparing for a multiday conference for young entrepreneurs hosted by Forbes in Boston, but as a college student without a disposable income, she said it was hard to invest in quality accessories.
On the day before her trip, Ms. Himmelberg found herself browsing a catalog of items at the library, and within a few minutes had checked out a black handbag that she took with her to Boston.
Instead of lugging around her school backpack, she said she felt at ease with the purse that completed her look. “It made me feel more confident,” Ms. Himmelberg said in a phone interview. “It just made me feel more professional.”
Because it is a pilot program, there are no plans to expand it to other libraries, Ms. Lee said, but the need for it has been clear.
“I’m just hoping that more people come in and use it,” she said, “and that this hopefully gets them started on their career, first job or first internship.”


A version of this article appears in print on Oct. 10, 2018, on Page A19 of the New York edition with the headline: Check Out That Tie. With a Library Card..